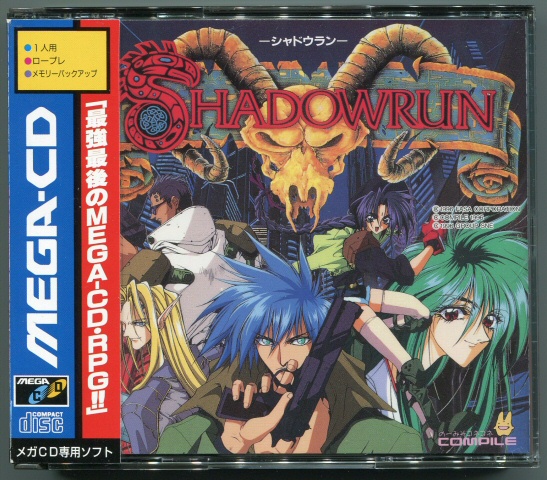 "Best of the Shadowrun trilogy, sadly marred by being only in Japanese"

So many people have talked of this game, it is something of an enigma, with few owning it, and even less written about it. One of many forgotten games, that should have had a Western release but never did.

I was one of the initial few who submitted in order to get it listed, and suddenly everyone was talking about this shadowrun game that no one had heard of. Lacking any form of decent info, I decided to write a review for it.

This game was not made by the companies that made the other shadowrun games, and indeed it is as far removed from the others as you could get, being best described as a cross between Snatcher and Shining Force.

The differences from the other Shadowrun games in the series are apparent from the start. Its set in Tokyo not Seattle. You begin the game already with a full team of shadowrunners, and they remain with you throughout, as part of your team The game starts with your group being hired to assassinate a Ronin Samurai ghost, and from there the plot thickens, taking in the whole of Neo-Tokyo, with various plot twists, changes and big battles, not that it matters, this game is so thick with complex Japanese symbols, your unlikely to understand any of it, but more on this problem later.

Gameplay is split in various modes, Snatcher style adventuring, where you question people, visit beautifully detailed locales, gain info from suspects, buy and sell items, and generally gather info. You can also log onto news computers, search the in game internet and phone people. Once enough progress is made here, and you travel to the necessary location, the game switches to a Shining Force style of combat.

You move your little avatars around the map, like any standard RPG, until you encounter a fight, where it switches to a tile based combat system. You choose either move, various types of attack, magic, or use an item. During each choice, virtual dice are rolled to determine the outcome, by pressing the button at the right time, and getting a good dice combo, will mean you do big damage, and defend more efficiently. Think like those old dungeons and dragons games you used to play. This game is based after all on the shadowrun board game.

You also get to log into the Matrix and engage in some beautifully CG rendered combat scenes. A big step up from the snes version of Shadowrun, more closely similar to matrix scenes in the Megadrive shadowrun.

The game is definitely an RPG by nature, since there are plenty of items, weapons, armour, spells and other thing that need to be bought, sold and upgraded. Stats also play a big role in gameplay.

Now for some scores!

Graphics: Some of the best on the Sega cd, varied color pallette, crisp images, very cool scenes, and an overall high attention to detail. All the characters are well drawn and animated, and everything has an anime feel to it. Possibly one of its biggest strengths, I mean its shadowrun, anime style! Booklet and cover art are also excellent. Overall: 9/10

Music: Very good music, lots of rock and techno, a lot of it reminiscent of John Carpenter composed pieces of music, excellent use of bass in the music. Each locale has a different them. Battle music can be a little repetitive, but doesn’t take away too much. Sound effects are adequate, the gun shots could have been better, and the dice rolling just sounds really off. Overall: 9/10

As you can see, aesthetically, this preforms exceptionally well, and is no slouch, the problem though, really lies in the gameplay, and the inability to understand the game.

Gameplay, plot and translation woes: The big gripe of this game. Ask any shadowrun fan some of the things that make shadowrun fun, and all will say a big element is the slightly apocalyptic futuristic style and storyline of it. Now while this game no doubt has well written plot elements by the bucket load, you wont understand any of it. The story here really is only for those fluent in Japanese, meaning already a large portion of the game is lost. It wouldn’t be so bad, but actually playing the game becomes a chore, since there is so much to keep track of. This hardcore RPG gaming by the book. Plenty of stats and items, all of which can be augmented and upgraded.

Eventually, most will sadly tire of the game, especially when you end up having to work things out by trial and error, it took me several days before I worked out the best weapons combo to defeat some of the bosses. You have to ask yourself, which gun do i sell, which armour do I buy, do I augment any of them? Who needs levelling up more. This wouldn't be too big a problem, except you cant simply wander around building up money and EXP points, for the most part, battles are predefined, you enter a cavern, see 3 Orks, kill them, and then they are no longer in the cavern. meaning mess up with your selections too often and you wont be able to complete this.

Gameplay overall: 5/10 (bump to 9 if you can speak Japanese fluently)

This very sad, since we are left with a well crafted, potentially excellent game, that you will never be able to fully experience.

If you see it for sale, by all means buy it, its value increases every day, and its getting harder to get hold of. But don’t expect a game you can waltz through, this will take time and dedication to complete, meaning perhaps it's only for the hardcore shadowrun player out there.

While certainly worthy of being owned, it is unlikely you will get much gameplay value from it. Chances are, most people will only be able to scratch the surface of what this game has to offer, before boredom strikes. I tried desperately to like it, and being a big Shadowrun fan, my score will be perhaps slightly higher than it deserves. Even in Japan there is not much talk of it, perhaps had the Sega CD done better in the West, a translation would have been secured and this game would have gotten the attention it deserved, but as things stand, it is nothing more than a work of beauty to be gazed at, but never properlly experienced.

Long a cult favorite here in the U.S., the Mega CD got its own version of the cyber punk thriller that was quite different from the one released here. Genesis Shadowrun Producer Tony Van had nothing to do with the project but even so, it remains one of the games most requested for translation in the system's entire library. A hybrid of digital comics and traditional RPG gameplay, the Japanese version of Shadowrun has more in common with fellow CD alumni Snatcher than just the futuristic Blade Runner feel. The plot is carried out through static screens using commands such as "look" and "talk" while the actual combat is done in a manner similar to early Ultima titles. A dice roll determines each action's outcome and you can even fight in cyberspace!

For more info on the whole Shadowrun scenario, check out our interview with Tony Van ( http://www.sega-16.com/Feature-%20Tony%20Van%20Interview.htm ) .

In particular, Shadowrun stands out as a great example of a well-known US license that sticks true to yet goes beyond the source material (and shows that the MCD could do more besides some decent PC-Engine ports). Compile took the original FASA idea and ran with it by placing the action in a bleak futuristic Tokyo setting, and their game gave both better-known console versions of the game a run for their money. It's not an easy game to get into however. There's a ton of Japanese text, and the battles are odd strategic based affairs with dice tumbling in one corner. But it's definitely worth the effort if you're looking for an example of a game that would have done well here if it were translated

The very last Sega CD game for any market, Shadowrun, was produced in December of 1995; however, it was not released until the following year. Sega ended production of Sega CD titles at the end of 1995 so it could focus on Saturn the coming year.

Chances are, if you've played the Genesis or Sega CD for any amount of time, you've played a game done by Tony Van. As a designer and producer, he has worked on dozens of games for multiple platforms, including the NES, PC, and of course both the Genesis and Sega CD.

Getting his start in the industry In 1987, he began to work for Mediagenic (Activision & Infocom), where he produced and designed such titles as Die Hard for the NES and Battletech: The Crescent Hawks' Revenge for the PC. After stints at Strategic Simulations and Lucasfilm Games, he eventually found himself at Sega of America, where he was responsible for over a dozen titles, among them fan favorites like Shadowrun, and the U.S. version of Beyond Oasis. Many FMV games were also created while he was there and regardless of how they may make you feel, wait until you read what it was like to create them! He has also worked for Electronic Arts and SegaSoft (where he launched HEAT.net) and is now an executive producer for UbiSoft.

- Sega-16: As you know, Shadowrun is an extremely popular title (and expensive on eBay). Were there ever any plans to localize the Japanese Sega CD version of Shadowrun? Any other import titles?

- Tony Van: Shadowrun is my favorite game that I both produced and designed, and since the demand exceeds supply on E-bay, I guess indicate others like it a lot too :)

When finishing Shadowrun Genesis, I was asked if I could localize it for Japan, but the game's cart size was a problem for them (16 megabit ROMs cost more to produce then they typical 8 megabit ROMS they were used to.) The text size was also an issue (Japanese titles need 16 pixel areas for their character sets, and we built Shadowrun with only 8 pixels for the English character set.) So, SOJ ultimately passed.

The funny thing about Shadowrun Sega CD is I had NO IDEA it even existed until about 2001, where I hit upon it while surfing the web. Obviously, it's a COMPLETELY different game then mine (which was a completely different game from the SNES version.) I know that FASA was creating a Japanese version of the Shadowrun RPG when I was finishing Shadowrun Genesis, so I assume the RPG was a hit there, and someone in Japan licensed it and did their own game.

I've never played the Sega CD version, by the way. But I still crank up my old game every once in a while, and I still find it challenging and fun, even after all these years and knowing all its secrets.

SHADOWRUN - Complie
Set in a futuristic Tokyo where a grim, Blade Runner-esque future awaits all but the Shadowrunners, whom the mega corporations that control the world have no information on. Wonderful cut scenes, stirring musical score, detailed and atmospheric graphics, the only draw back to native English readers is the Japanese text. Whilst sadly scheduled to be the last Sega CD release in the States, the English language version never materialised. With the being the final Mega CD release in Japan and the finest version of the game, it is highly collectable universally.

Comments: Possibly the most sought after MEGA-CD titles and the last release for the system. Shadowrun is a cyberpunk themed strategy RPG with adventure elements thrown in.