Drake is one of the main antagonists in Shadowrun for SNES.

Drake is the final boss and reason Jake Armitage got amnesia and almost died. It has no real name and does not have any sort of explanation or reference in Shadowrun Returns or Dragonfall. He was only known as "Drake" and didn't have a special name, a specific allegiance or specification as a Great Dragon.  Drake was probably a Great Dragon, because of his power, his influence, his knowledge of magical beings as the Jester, and the fact that he was the owner of one of the biggest companies in 2050. He is apparently based on the "Western Dragons" and "Great Dragons" from Shadowrun 1st Edition. The post-credits of the game state he and Jake would meet again in "Shadowrun II", but there was no sequel and he did not feature in Shadowrun Returns. 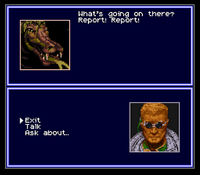 Jake's conversation through the phone with Drake. 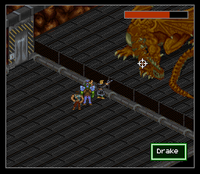 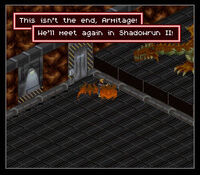