Jake Armitage was a shadowrunner and data courier in Seattle in the 2040s and 50s.

Jake Armitage was a shadowrunner hired to serve as a courier for information who was shot by assassins and left for dead in 2050 in Seattle after negating cooperation from Drake and ending his run. However his life was saved by a shapeshifting lupine figure named Kitsune, that revived him. He awoke in a morgue with amnesia because of brain damage, more specifically, loss of a part of the brain.

Trying to piece together his memories and determine who wanted him dead, he returned to work as a Shadowrunner. Jake is a rare Shaman mix with ranged combat and Decker cyberware, because he had it implanted before discovering his calling as a Dog Shaman, his spirit protector and guide.

He discovered that his head not only contained a bomb, but also crucial data he carried as a courier without his knowledge. This data was a program designed to kill a malevolent artificial intelligence created and protected by Drake and Aneki Corporation, so he finished his run by killing Drake and destroying Aneki.

In 2054, a fellow shadowrunner investigating the death of Jake's friend Sam Watts assisted him in taking down the Halloweeners who were after him because of a corp bounty issued on his head. He also assisted the shadowrunner in escaping an assault by Universal Brotherhood's private bodyguards ordered by Sam's twin sister Jessica Watts. After the shadowrunner took down Jessica, Jake offered them work.

As a side effect of Jake Armitage's confrontation with this artificial intelligence a copy of his personality accidentally was uploaded into the matrix. - This copied personality became one of an unknown number of e-ghost fragments, that took possession of the FBI agent Seth Dietrich in 2075.[1]

While the plot of the video game he appeared in was loosely adapted from Robert Charrette's novel Never Deal With a Dragon, the name "Armitage" is a reference to a character from William Gibson's novel, Neuromancer; published in 1984 and possibly the most influential book in the cyberpunk genre. However, Jake Armitage more closely resembles the main protagonists in Neuromancer: Henry Case & Movie Split Second: Harley Stone (Rutger Hauer) 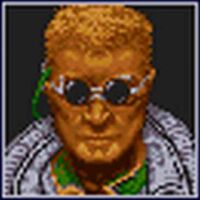