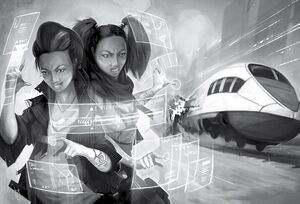 Lilith and Eve are twin sisters from Korea, dissonant technomancers, and career terrorists.

Lilith and Eve were known as activists and operatives within M1919, a Korean nationalist movement of students. The twins perpetrated acts of Matrix sabotage and terrorism that pushed the bounds of acceptability of M1919, and were recruited by Pax into Ex-Pacis shortly afterwards.

The twins became increasingly sociopathic and impulsive during this period in their lives, and railed against Pax's style of subtlety and long-term planning. The twins resolved to break away from Ex-Pacis, and gathered up a considerable number of Pax's followers and resources in their attempt. As Pax had a pragmatic indifference to the organization that was essentially little more than an instrument, she made a perfunctory attempt at reigning things in, before simply letting the twins go with what assets they could take with them. And thus was the formation of Seed.

Seed became the sisters personal weapon against whatever bothered them at the moment, leading the organization to take up many diverse causes within the sphere of cyberspace. The sisters' sociopathy was also less tempered when they weren't part of a greater organization, allowing them to cause more mayhem than if they were part of M1919 or Ex-Pacis.

The sisters' organization has yet to cause any notable damage, though it may just be a matter of time, since their operations having been growing in scope. Lilith and Eve, and Seed, enjoy a level of infamy as the "darlings" of the radical hacker movement.

Retrieved from "https://shadowrun.fandom.com/wiki/Lilith_and_Eve?oldid=49346"
Community content is available under CC-BY-SA unless otherwise noted.