Orks (Homo sapiens robustus) are a metahuman race in the awakened world present since the 1st edition. They are the most numerous and least respected of the metahuman races[1] , often seen as an outsider[2] .

The first orks of the sixth World emerged during the Unexplained Genetic Expression in the year 2021 as either young humans changed to orks or ones born as orks from human parents. They are considered metahumans, like trolls, elves, and dwarfs. Orks are able to interbreed with humans and fellow metahumans. Despite this, their offspring will be of the race of only one of their parents. No half-breeds exist.

On average, orks are 1.9meters (6'2") tall and weigh around 128 kilograms (282 pounds)[3]. They are proportioned but bulkier than humans and their skin coloration varies from pale pink to ebony. Distinguishing features include large lower canines that protrude from their mouths and the ears show definite points but are less elongated than those of elves. Orks also have low-light vision.

Ork gestation is roughly 6 months and the mothers usually bear four children, though six to eight is not uncommon. Most of the children that appear as orks that grow up much faster than humans, reaching maturity around 12.  But some can be born human and the majority of them will later goblinize at puberty.

The average lifespan of orks is between 35 to 45 years[4] . However, those that were born human and goblinized later traditionally live to human life expectancy

Orks usually speak the language of their home countries but since 2060 there has been an increasing popularity for Or'zet, a language said to be the ancient ork tongue from the old world.

There are some rare metahuman variants of orks, that are - mostly - characteristic for some special geographic area:

In the fantasy role-playing games Earthdawn and Shadowrun, orks are, in contrast to the common fantasy orc, neither inherently good nor evil. In Earthdawn, they have their place among the other name-giving races: humans, dwarfs, elves, obsidimen, t'skrang, trolls, and windlings. In Shadowrun, orks are just one race among others on Earth in the years past 2050. 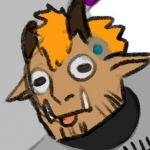